Tony: Thanks posting information about your experience with ... - Feb 28, 2008 by davef

I was asked to post my finding about HumiSeal stripper for polyurethane coating. Both as an information sharing as well as someone who may offer advice on teh situational use of 1063 solvent stripper.

So here is what I found:

The stripper worked too well in my opinion. We had 2-3 mm 1A33 polyurethane coating and I let one sit for 60 minutes in the 1063 liquid stripper (as opposed to gel stripper) at room temp. An hour will take everything off but after rinsing in hot water and then a wash the boards still had a white blotchy film effect. This film could be removed with hard work but underneath the film the PCB shine coat had been removed and the PCB itself appeared slightly blotchy. I believe the film comes from unsoldered lighter metals (I assume tin) as the white film appears to pool around those parts (i.e. through hole connectors)or maybe even from the raw PCB itself.

Then I ran a unit at 20 minutes with a minor vibrate/agitate and found much better results. I still had a bit of white film but the film seemed very light and only by the components and not all over the board. So I believe you have to baby-sit a few soaking boards to determine how long you will need on average and keep the window tight. Then use the gel form of the stripper or a damp Q-tip with the liquid stripper to remove any isolated coating still left (which shouldn�t be very much at all if your coating is relatively uniform).

Overall the stripper worked well and left the components undamaged and aesthetically intact. My only complaint is that it is so effective that you have to watch what you�re doing very closely or you�re going to have less PCB left than you started with.

Tony: Thanks posting information about your experience with strippers.

First, why did you need to strip the entire board?

Next, please clarify the following points to expand our knowledge of using Humiseal 1063 Stripper: * How long was the conformal coating on the board prior to stripping? * What did you find about using open or closed containers for tolding the stripping liquid and boards being stripped during processing? * We�ve used gels for local stripping. What is it about liquids that make them better for stripping large areas? * How did you select the type of water [eg, tap, DI, etc.] for cleaning the stripped board? * What type and level of skills do you suggest for the operator stripping boards? * What type of personnel protection and ventilation do you suggest? * When you ran �minor vibrate/agitate,� what was the temperature? * How does increasing the temperature affect the stripping rate? * You mentioned that the non-minor vibrate/agitate [the first process you described] affected the �shine coat.� Does �minor vibrate/agitate� affect the �shine coat�? What do you mean by �shine coat?� Is this solder mask? * When you say, �less PCB left,� do you mean bare board or the assembled board? Is this a degradation of the bare board laminate? * Did the stripper affect the solder mask? * Did the stripper affect metal of the copper traces on the board or the leads of components? * How did you control the �cleaning effectiveness� of the stripping liquid after stripping multiple boards? * How did you dispose of the used stripper?

I stripped the entire board because I had to have the boards troubleshot. Had a high failure rate from the field.

The board coating was applied about 5 months ago. I was told by my people anything past 3 days and you will need this type of stripper as opposed to our "common" stripper.

I used a closed container to prevent evaporation. However I did use a plastic container which in hind sight may have degraded in the solution and changed the outcome.

I chose liquid becuase i wanted to get under the ICs and I wasn't sure if gels would does this as well as liquid. I also thought about agitating the process and liquid seemed like the better choice.

The type of water I chose was un-informed. A call to the manufacturer would settle that issue for you.

An operator need very little knowledge or experince but must be someone who has attention to detail and follows instructions very well.

Ventilation was easily achieved with a small fan. I worked in a janitors closet about 5ft by 4 ft with an open door and a fan and felt no ill effects. However eye protection and hand protection would be necessary to avoid irritation from splashes.

The room temperature I was operating at was about 70 degrees F.

I did not study any temperature variance effects to the process. One could assume that if you raised the temperature the process would be faster and so would your rate of evaporation. However like I said, I did not partake in that study.

What I meant by shine/coat is the clear coat had been stripped from the laminate. The PCB had no shimmer anymore but a dull flat color. This was due to the amount of time I left the board in the solution. It did not have anything to do with the agitation.

Less PCB meant the shine or clear coat seemed to be stripped as well as the conformal coat. The PCB also appeared "blotchy". Again this was due to letting the baord soak too long and it also could have had something to do with the plastic container I was using. It was all I had at the time and the customer was pressing hard for us to solve the electrical defect witnesses in the field.

The solder mask, component leads, and copper traces were all seemingly unaffected by the stripper. But like I said some cheap tin alloy looking though-hole connectors appeared to have a film gathered around them. However that may have been a chemical re-action with the metal or maybe the plastic container and the metal or the PCB... I just dont know with all those variables.

The cleaniness of the stripper in coomparison with repeatability or useage was another step I didn't look into. I did five boards to find the electrical problem. Now that the problem is solved I will be removing the conformal coating from just one 8 pin SOIC.

Hope that helps a little more. If i had the time or resources I would have done something more controlled and indepth but teh circumstances dictated a fast result not a proven process. 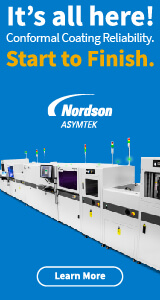