What is the reduction in aperture size for your stencil vers... - Jun 02, 2015 by tombstonesmt

We're looking into an issue with 0402's in close proximity to each other. The paste gets mashed into the paste from adjacent parts. Some have suggested I deviate from JUKI's default place stroke of 0.5mm to 0.0mm. I've known this to cause problems elsewhere.

Does anyone else have any ideas? Should this issue be tackled at the PCB design level or the stencil edit level?

What is the reduction in aperture size for your stencil versus pad? Or are they at 100%?

All my research so far says we need to be looking at the stencil apertures.

Some of the answers to design or stencil aperture/placement machine depend upon what is the current spacing between your components which you didn't specify. Chip components such as 0402's and 0201's typically have very small reductions in paste aperture size. Chip caps/resistors should typically be spaced .020" from each other, +/- .005". having said that I have had some as close as .005" on some very tight designs and not bridged. On 0402s(inch) we typically reduce 2 mils on each side. If the paste from two parts is squeezing out far enough to touch I would guess that you either have too much placement force or the machine doesn't realize the correct board height and is pushing the parts down too far. Hope this helps.

Well, it took me a while but I had a look at some gerbers.

We were able to alleviate some of the bridging by reducing the place stroke, so the part just barely touches the top of the paste, but it ended up causing problems for the machines releasing the parts. 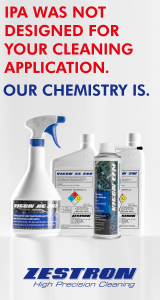