We were and still are having problems with magnetized nozzles on the HSP 4796. The problem was found when numerous parts were thrown after being placed on pad. It appeared to be picking parts up off the board after placement. Nozzles were pulled out and checked. These nozzles could pick up a small metal washer. After all nozzles were de- magnetized the skewing, missing parts, etc went away (on all parts). The problem is we are once again seeing the magnetized nozzle. Has anyone seen this and if so what is causing it? What is the long term fix if any?

We have four 4796 machines, and I have not yet seen this problem. By chance did You check to see if the Nozzle Storage Plate is magnetized? Just a thought. Hope this helps.

We have not checked the storage plate yet. I did send an email out to a couple of our other plants and discovered they too are seeing problems. The storage plate has come up in disscussions here. Since you mention it as well I think we should take a look. Thanks.

Make sure chips (some Resistor contain nickel,or A-42 (Fe-Ni)leads made like SOT-23, etc )some time they also are magnetized and get attracted by nozlles tips. rgds

Any luck with the Nozzles? 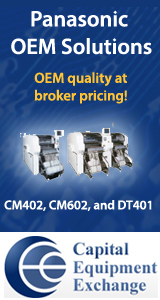 Have you found a solution to REDUCE DISPENSE REWORK? Your answer is here.
World's Best Reflow Oven Customizable for Unique Applications