I teach Industrial Electronics courses at a 2 year College. We use Analog/Digital trainers with standard Breadboards for full size IC's. My problem is this, Alot of people in the manufacturing Industry have been gracious enough to send samples of their products {IC's} for our classes to evaluate. I would cautiously estimate that 95% of all the IC's that I have received were of the Surface Mount family and being the age of miniturization are very small in comparison to a standard DIP IC. I have come to this forum seeking any ideas from you, the experts. I did buy "Surfboards" built for this purpose but they averaged about $5.oo a piece, and when your running 20 trainers, and they still have to be soldered in place. $5 a test is kinda high when evaluating a 32 cent chip. I just want the students to be aware of the new technologies and be able to sample todays IC's for the Digital Classes. Any and all help would be greatly appreciated. Thank You.

Mike wrote: ...I did buy "Surfboards" built for this purpose but they averaged about $5.oo a piece, and when your running 20 trainers, and they still have to be soldered in place. $5 a test is kinda high when evaluating a 32 cent chip...(snip) Hi Mike! When I first read the subject of your email, the "surfboards" were the first thing that popped into my mind. But then after I read that you had already tried them, I thought of something else that's REAL cheap, but it'll take a little extra work. This something that we've done in the past with a certain customer that came in with a prototype board where they had layed-out a DIP IC location for an IC that was actually surface mount. What we did was to "dead-bug" the IC (flip it upside down, it looks just like a dead bug with it's legs in the air..) and then glue it to the board, (hotmelt glue works fine). Then ran jumper wires from each lead to the appropiate PTH. Yeah sure, it don't look like Martin Marietta, but it do de' job...they were prototypes anyway, the customer just wanted to make sure the board worked. It really isn't that tough to do, as long as it's only 50-mil pitch...if it's any less than that, forget what I said about it not being tough to do. Just pre-prep and strip one end of your wires, flux the leads on the glued IC, and then with a well tinned solder tip, just touch the wire tip as it's sitting on one of the leads...less than a second, otherwise you may ruin the part. We found that out the hard way, without the leads sitting on a pad you don't have anything else sucking the heat for ya' when you put a soldering iron to it and it's real easy to fry it. In fact, you may want to solder one wire and lead, then for the next one, do the opposing diagonal lead, so you're not concentrating the heat around one small area of the IC...you're going from one side to another and giving things a chance to cool down a bit. It doesn't take long at all wire it up...you should be able to wire a 20-pin SOIC in just a few minutes. P.S. It goes without saying that you need to make sure where pin-1 is before you glue it down on the board...another little "gotcha" we found out about the hard way...(GRIN)

Best Reflow Oven
Be Smart with your Placement. Go MOBILE with the New Scorpion REWORK SYSTEM from Metcal.
Localized Ion Chromatography targets critical areas of concern on the board surface to assess cleanliness levels and quantify ionic residues. Contact ZESTRON today for a quote! 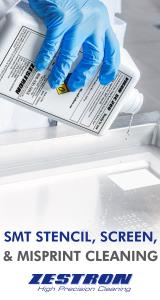