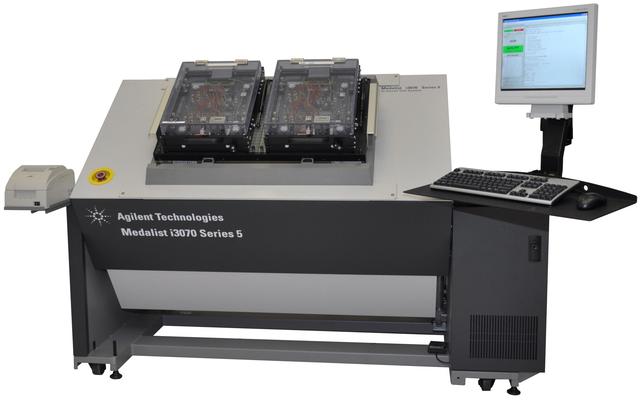 Improve both board test coverage and test throughput at in-circuit test with i3070 and i1000D ICT systems that offer one of the best ROICs available in the market today.

The Medalist i3070, the next generation In-Circuit Test System, enables 20% more output with unparalleled test coverage and robustness, extending the performance of the world's most proven ICT System.

The new point-and-click interface removes the user’s need to type in commands during the operation of the tester. All commands are menu based, thus the user does not need to remember each command to be executed. This allows inexperienced users to start using the system quickly.

The Interactive Pin Locator allows the user to search for any component on the board under test as well as probes and testhead resources. This tool is an enhancement over the “find pins” command. This tool can be used during the test debug process to identify the location of a failing component or the location of a probe on the fixture. Together with the handheld probe, the connectivity of a component pin to the tester can be checked quickly using this tool.

The algorithm for test development has been improved. For resistors and capacitor tests, wires selection and test options selection has been improved in the IPG such that they reduce the test times of these tests. It is possible for a typical board to see 20% improvements to the analog test time. The node sequencing in the shorts test has been recalculated to reduce the occurrence of phantom shorts.

AutoDebug was introduced with the i5000. This feature is now available for the i3070. Using a set of rules that a user can modify, the AutoDebug feature will base on a known good board to modify each analog test for stability. The set of rules mimic the actions that a user will take during the debug process. A different set of rules is available for each component type, thus allowing for more accuracy in the debug. Statistical measures (CPK) are employed to determine the stability of the test. This automatic feature can reduce the normal 3day debug process to about 4hours.

The i3070 provides a single software stream and compatible hardware to allow the user to use both HybridPlus Mux pin cards as well as Hybrid144 UnMux pin cards.

Medalist VTEP v2.0 is a suite of vectorless test techniques which encompasses the new Network Parameter Measurement technology as well as the original Agilent Medalist VTEP technology and the award-winning Medalist iVTEP. The new Network Parameter Measurement technology is a world-first, allowing users to detect opens on power and ground pins on connectors – something which many industry players had previously considered as beyond existing test capabilities.

World Source Equipment: Used equipment sale. Hundreds of items on sale.
IPC Certification Training from the comfort of your home or office