Akrometrix is a Georgia-based company founded in 1994 to provide services and equipment to measure and resolve thermo-mechanical surface flatness issues in manufacturing and assembly operations, most notably in the production of electronic circuit substrates and components. Its pioneering technology was based on the research of Dr. I. Charles Ume, a professor at the Georgia Institute of Technology (Georgia Tech). Akrometrix licensed and commercialized the application of Dr. Ume's technology, which today serves as a crucial component in the production, and continued miniaturization, of advanced electronics products.

Akrometrix has become the industry leader in real-time metrology emphasizing resolution of thermo-mechanical issues at all levels of electronic materials production, components fabrication and assembly processes.

The CXP (Convection Expandable Platform) is a low cost, stand alone equipment primarily targeted at the EMS and PCB Fab Market. The CXP uses the Digital Fringe Projection technique to measure a field of view of 64x48mm with a measurement resolutio...

The TherMoiré® PS600S is a metrology solution that utilizes the shadow moiré measurement technique combined with a...

The TherMoiré® PS200S is a metrology solution that utilizes the shadow moiré measurement technique combined with a... 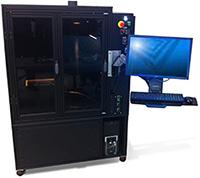 The AKM600P is a metrology solution that utilizes the shadow moiré measurement technique combined with automated phase-stepping to charac...

Akrometrix Studio is an advanced set of integrated software modules that work together to provide the most comprehensive set of surface characterization and analysis capabilities available. When used with the TherMoiré AXP surface measureme...

Knowing how package warpage changes over temperature is a critical variable in order to assemble reliable surface mount attached technology. Component and component or component and board surfaces must stay relatively flat with one another or surface mount defects, such as head-in-pillow, open joints, bridged joints, stretched joints, etc. may occur. Initial package flatness can be affected by numerous aspects of the component manufacturing and design. However, change in shape over temperature is primarily driven by CTE mismatch between the different materials in the package. Thus material CTE is a critical factor in package design. When analyzing or modeling package warpage, one may assume that the package receives heat evenly on all sides, when in production this may not be the case. Thus, in order to understand how temperature uniformity can affect the warpage of a package, a case study of package warpage versus different heating spreads is performed.<p><p>Packages used in the case study have larger form factors, so that the effect of non-uniformity can be more readily quantified within each package. Small and thin packages are less prone to issues with package temperature variation, due to the ability for the heat to conduct through the package material and make up for uneven sources of heat. Multiple packages and multiple package form factors are measured for warpage via a shadow moiré technique while being heated and cooled through reflow profiles matching real world production conditions. Heating of the package is adjusted to compare an evenly heated package to one that is heated unevenly and has poor temperature uniformity between package surfaces. The warpage is measured dynamically as the package is heated and cooled. Conclusions are drawn as to how the role of uneven temperature spread affects the package warpage....

Warpage management consists of planning, measuring, analyzing, sharing, and reacting to data related to the surface shapes of electronics components as they change throughout the reflow assembly process. Leading semiconductor manufacturers have had warpage management systems in place for ten years or more, mainly because microchip package warpage must be understood and compensated for in order to attain high assembly yields. Similarly, newer device architectures such as package-on-package and system-on-a-chip are sensitive to warpage-related assembly issues, and companies involved in the manufacture and assembly of these devices tend to have the most advanced warpage management programs....

Ready to Start Measuring PCB Warpage during Reflow? Why and How to Use the New IPC-9641 Standard

Understanding warpage of package attach locations on PCBs under reflow temperature conditions is critical in surface mount technology. A new industry standard, IPC 9641, addresses this topic directly for the first time as an international standard.

This paper begins by summarizing the sections of the IPC 9641 standard, including, measurement equipment selection, test setup and methodology, and accuracy verification. The paper goes further to discuss practical implementation of the IPC 9641 standards. Key advantages and disadvantages between available warpage measurement methods are highlighted. Choosing the correct measurement technique depends on requirements for warpage resolution, data density, measurement volume, and data correlation. From industry experience, best practice recommendations are made on warpage management of PCB land areas, covering how to setup, run, analyze, and report on local area PCB warpage.

The release of IPC 9641 shows that flatness over temperature of the package land area on the PCB is critical to the SMT industry. Furthermore, compatibility of shapes between attaching surfaces in SMT, like a package and PCB, will be critical to product yield and quality in years to come....

Three full-field optical techniques, shadow moiré, fringe projection and digital image correlation (DIC), are used to measure temperature-dependent warpage for a PBGA package and a PCB component land site from room temperature to 250ºC. The results are qualitatively similar, but imaging resolution and noise properties create offsets between coplanarity values. The paper summarizes strengths and weaknesses for each technique....

Oct 16, 2017 | Akrometrix will display its newest warpage metrology system in Hall A3, Stand 102/1 at productronica 2017, scheduled to take place Nov. 14 – 17, 2017 at the Messe München, in Germany. The new Tabletop Shadow Moiré (TTSM) system offers all of the software features of Akrometrix’s thermal warpage metrology systems in a room temperature unit which provides full field-of-view measurement in less than two seconds.

Aug 30, 2017 | Akrometrix will be a panelist in the upcoming SMTAI Spotlight 5 panel discussion, scheduled to take place Wednesday, Sept. 10, 2017 from 2-3 p.m. The discussion, entitled “Warpage Induced Defects and Component Warpage Limits,” will be streamed on Facebook Live.

Jun 29, 2017 | Akrometrix is pleased to announce that it has launched its newest warpage metrology system – the Tabletop Shadow Moiré (TTSM) system.

Feb 15, 2017 | Akrometrix is pleased to announce that it has been awarded a 2017 NPI Award in the category of First Article Inspection for the new AXP 2.0. The award was presented to the company during a Tuesday, Feb. 14, 2017 ceremony that took place at the San Diego Convention Center during the IPC APEX EXPO.

Akrometrix Announces the Release of the CRE6, Convection Reflow Emulation for Warpage Metrology

Sell your surplus machinery!!! We buy all types of Fabrication, CNC machines, and More. Contact Tom@xtechauctions.com for more details.
Repair tools for all your electronic circuit board repair needs.
The 2022 IPC Certifications Schedule is Here. Train Online, On-Site, Dedicated Online, or a Variety of Scheduled Classes.