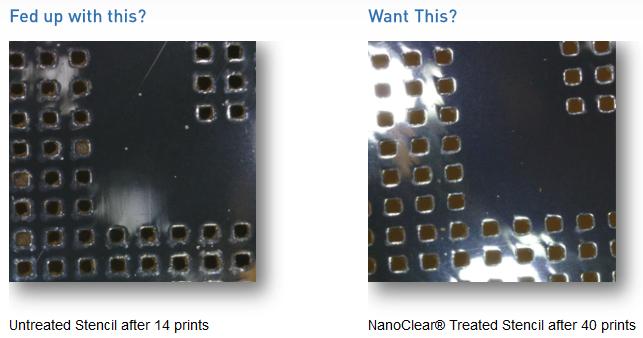 Enhance your stencil performance in seconds!

Aculon is pleased to announce the launch of their latest generation of stencil coating technology. Aculon’s proprietary technology treats the underside of stencils to make them fluxophobic i.e. repels flux and oils.

By using NanoClear your stencil will repel flux which means: The better quality printing is due to the reduction in bridging as the flux is now repelled from the aperture walls. Tests have shown that treated stencils show significantly reduced the cleaning cycle frequency resulting in both improved print quality and better manufacturing efficiency.

Faster release and improved print resolution is achieved as the paste is more easily released from the aperture walls due to the Fluxophobic nature of the treatment. The Aculon NanoClear treatments are now 50% stronger due a greater concentration. As can be seen from the graph below a treated stencil is 8 times more oil repellent than an untreated stencil even after 100,000 abrasion cycles.

The NanoClear treatment was found to be compatible with VIGON SC 210 during the above compatibility testing. There was no delamination or discoloration observed after exposure. There was minimal degredation in the fluxophobic performance of the NanoClear treatment with highly repellent Water contact angles of 110 degrees and oil contact angles of 60 degrees.