1736 results found for "residue" in the Electronics Forums

Sep 3, 2009 | I have a customer that is having a flux residue problem after wave soldering. Flux is roaring throu

Jul 31, 2009 | Dear Sean Contrary to believe MOST formulators of No Clean fluxes or No Residue fluxes use organi

Jul 28, 2009 | Hi Sean, No-clean flux does leave a residue. Under the best conditions, it is invisible. There

Jul 28, 2009 | Hi All, I have some question about flux residue resulted from non clean process as following:

May 26, 2008 | It's possible that the flux residues from the solder paste used in your SMT process is not compatibl

Jan 8, 2007 | The water soluble flux residue is staying there because the rinsing temperature it may be too low.

Dec 26, 2006 | What is the make-up of the residue? Is finding this residue new to your standard operation? What h

Oct 31, 2006 | First, we assume the white residue is only on the connector and not on other components. That would

Aug 22, 2006 | Using no-clean flux going thru wave when comes out there is a bit of flux residue left on board. If

Aug 17, 2005 | Dave, Answers to your questions: * From your pictures, the white residue appears to be only

Aug 16, 2005 | Peter: Questions are: * From your pictures, the white residue appears to be only on the solder mask

Aug 16, 2005 | Hello, I have a question on white residues formation at wave soldering. We have recently run expe

Jul 7, 2005 | Hi Lloyd, Have you done any ionic analysis to find out what the flux residue is composed of? If yo

Apr 27, 2005 | Have you examined what type of residue is present? It is possible that what you are seeing is benig

Apr 27, 2005 | You will probably need to change paste. If I remember correctly the SMQ92J has a post reflow residu

Apr 27, 2005 | Hello everyone, During our PIH process we found much flux residual around or on the joints of PIH a

Aug 29, 2004 | Chen, It is always best to place one�s effort on determining the cause and content of the residue

Aug 28, 2004 | Currently, in my working factory, we facing the flux residue remain on connector after washing. (o

Jul 1, 2002 | I have used a heat gun and found it effective at burning off these residues. Also, check the fine S 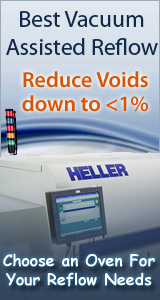 Reflow Oven.
Private label coffee for your company - your logo & message on each bag!