North American PCB Sales Up, Orders Down, in June 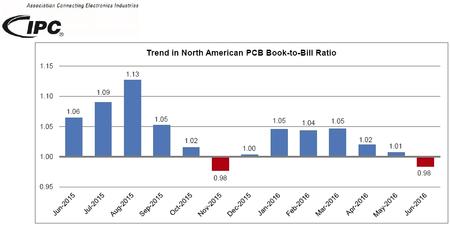 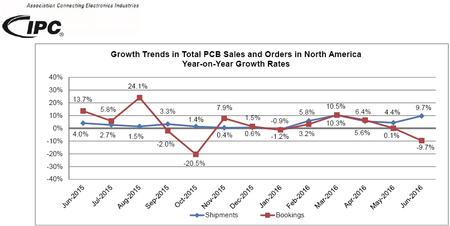 IPC - Association Connecting Electronics Industries® announced today the June 2016 findings from its monthly North American Printed Circuit Board (PCB) Statistical Program. Compared to the same month last year, PCB sales growth was strong while orders were down, causing a decline in the book-to-bill ratio to 0.98.

Total North American PCB shipments in June 2016 were 9.7 percent above the same month last year. Year-to-date growth is up 6.1 percent for the first six months of the year. Compared to the preceding month, June shipments were up 18.9 percent.

Conversely, PCB bookings in June decreased 9.7 percent year-on-year, bringing year-to-date bookings growth down to a positive 1.3 percent. Orders in June 2016 were up 18.2 percent from the previous month.

“Sales growth in the North American PCB industry was strong in June, while orders continued to decline,” said Sharon Starr, IPC’s director of market research. “The book-to-bill ratio has been trending downward since April and the divergence between June’s sales and order growth pushed the ratio below parity” she added, “signaling the likelihood of slowing sales growth in the third quarter.”

The next edition of IPC’s North American PCB Market Report, containing detailed June data from IPC’s PCB Statistical Program, will be available within the next two weeks. The monthly report presents detailed findings on rigid PCB and flexible circuit sales and orders, including separate rigid and flex book-to-bill ratios, military and medical market growth, demand for prototypes, and other timely data. This report is available free to current participants in IPC’s PCB Statistical Program and by subscription to others. More information about this report can be found at www.ipc.org/market-research-reports.

The book-to-bill ratios are calculated by dividing the value of orders booked over the past three months by the value of sales billed during the same period from companies in IPC’s survey sample. A ratio of more than 1.00 suggests that current demand is ahead of supply, which is a positive indicator for sales growth over the next three to six months. A ratio of less than 1.00 indicates the reverse.

North American PCB Sales Up, Orders Down, in June news release has been viewed 743 times

Liquid Dispenser performs pick and place operations within the same system, watch the video!
Benchtop Fluid Dispenser
IPC Certification Training from the comfort of your home or office