The following statement can be attributed to John Mitchell, President and CEO of IPC, the global association representing the electronics manufacturing industry:

“The electronics manufacturing industry applauds the U.S. Senate for approving the U.S.-Mexico-Canada Agreement (USMCA) with broad bipartisan support. As soon as President Trump signs the legislation, which is expected within days, it will enter into force.

“This is a very positive step for our industry and for the millions of people who work in it in the United States, Canada, and Mexico.

“With electronics exports making up over 30 percent of U.S. exports of manufactured goods, natural resources and energy exports to Mexico and nearly 20 percent of such exports to Canada, USMCA will pave the way to continued prosperity for electronics manufacturers, U.S. workers and consumers.

“The pact will bolster the industry’s confidence in making investments in human resources and equipment in all three nations.”

IPC was an active advocate for the USMCA. In December, IPC sent a letter to all members of the U.S. Congress, urging them to vote promptly and affirmatively on the USMCA implementing legislation. IPC members contacted their elected officials in meetings, correspondence and phone calls.

Last May, IPC released a study that found the total value of U.S. electronics trade with Canada and Mexico was $155.5 billion in 2017, with trade in electronic systems and components being especially important to the North American automobile industry. Mexico imports 34 percent of U.S. printed circuit board production—larger than the next four largest markets combined.

Liquid Dispenser performs pick and place operations within the same system, watch the video!
Are you moving towards high precision applications such as 01005 dispensing? Learn how to achieve your dispensing goals without compromise.
Complete Conformal Coating Line solutions for end-to-end process automation and closed-loop quality control with global support. Nordson Asymtek 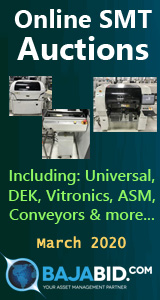