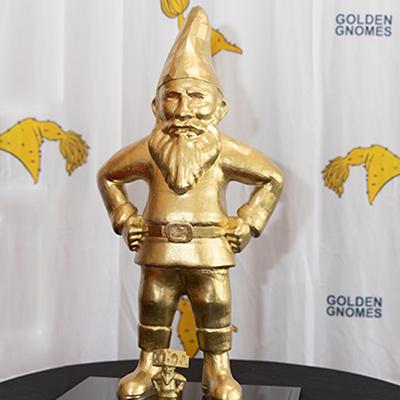 The second annual Golden Gnome Awards ceremony was held on May 10 at IPC SummerCom 2022. The awards, inspired by IPC’s fictional TechNet gnomes Clumpy and Kloumpios, recognize the outstanding and creative work of IPC A-Teams. IPC A-Teams are dedicated groups of volunteers within IPC working groups who take on a significant amount of work on behalf of their groups. The Golden Gnome Awards Ceremony has grown to be a must-attend event for IPC’s technical standards volunteers, as their peers are recognized during a fun and light-hearted event.                             “Not only does the Golden Gnome Awards event give us the opportunity to honor our standards development A-Teams and their members for their outstanding accomplishments throughout the year,” said Teresa Rowe, IPC senior director, assembly and standards technology, “but we get a chance to roll out the red carpet – literally – as we celebrate our volunteers.”

Setting the Golden Gnomes Awards ceremony apart from other awards events, this year’s ceremony included a red carpet entry with a Golden Gnome photo op area for SummerCom attendees to show their gnome enthusiasm, as well as an awards ceremony format filled with laughter and fun.

A highly sought-after award by IPC A-Team members, each Golden Gnome Award trophy is created using a 3D printer and then hand-painted by an IPC staff liaison, making these trophies one of a kind. This gnomes for this year’s trophies even donned cheese-head hats, a nod to Wisconsin, the host state for IPC SummerCom.

The 2022 Golden Gnome Awards winners are:

This award recognizes the lifetime or long-term achievement of A-Team members who have demonstrated dedicated A-Team participation or leadership over multiple years and/or have shaped the way A-Teams work in developing IPC standards.

IPC (www.IPC.org) is a global industry association based in Bannockburn, Ill., dedicated to the competitive excellence and financial success of its 3,000+ member companies which represent all facets of the electronics industry, including design, printed board manufacturing, electronics assembly and test. As a member-driven organization and leading source for industry standards, training, industry intelligence and public policy advocacy, IPC supports programs to meet the needs of an estimated $2 trillion global electronics industry.