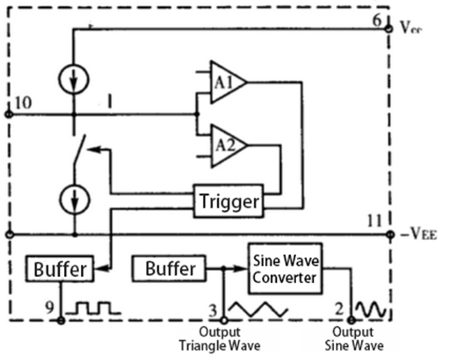 At present and in the future, the maintenance of the electrical control equipment, VFD (Variable Frequency Drive) will become the professional knowledge that all electricians need to master. As a reliable supplier of leading brands of VFDs for many years, OKmarts now shares ten simple and easy maintenance methods to the majority of VFD maintenance technicians. Hopefully these experience can help you in the maintenance of VFDs.

The middle DC link of AC-DC-AC VFD uses large inductor as energy storage element, buffering reactive power. In the state of power generation, the regenerative power fed back to the DC side can be easily fed back to the AC power grid by changing the polarity of the output voltage of the grid side controlled rectifier. The speed regulation system with four quadrant operation ability can be used in single machine applications required frequent acceleration and deceleration and other dynamic performance, as well as in the energy-saving speed regulation of large capacity fans and pumps.

Variable frequency speed regulation is recognized as the most promising speed regulation mode at home and abroad. The reason is its excellent speed regulation, starting and braking performance, high efficiency, high power factor and power saving effect, as well as wide application range and many other advantages. It is of great significance to deeply understand the trend of AC drive and control technology.

The single-phase AC-DC-AC inverter circuit is composed of two parts. The conversion of AC to DC is the rectification process. The uncontrolled rectifier diode circuit is selected, and the capacitor and inductance are selected for filtering on the DC power side. So a relatively straight DC supply voltage can be obtained. The structure is relatively simple, reliable and the performance meets the design requirements. It is an inverter that converts DC to AC. Single-phase bridge inverter circuit and PWM control is used, and the output voltage and frequency can be adjusted by PWM control. The intermediate DC link is capacitance filter, so voltage inverter is selected.

The DC supply voltage Ud in the middle of the main circuit is obtained by alternating current rectifier, while the inverter part is single-phase bridge PWM inverter circuit, where IGBT is used in the power device. The control circuit is composed of single chip integrated function generator ICL8038, which generates two PWM signals. These are used to control two groups of IGBT (VT1, VT4, VT2 and VT3). ICL8038 can work normally only with small external elements, which can be used to generate sine wave, triangle wave, and square wave, with the frequency range from 0.001 to 500KHz.


The AC-DC-AC inverter circuit consists of two parts. The AC-DC converter (ui—Ud) is used as the rectifier part. The uncontrollable diode rectifier circuit is adopted. The DC side is filtered by capacitors and inductors, and the flat intermediate DC supply voltage can be obtained. The structure is simple and reliable, and its performance meets the needs of experiments. DC to AC (Ud—uo) is the inverter part, which adopts single-phase bridge inverter circuit and PWM control. The output voltage and frequency can be adjusted by PWM control. Because the middle DC link is capacitor filter, the inverter circuit in the figure is voltage circuit.

In this study, the control circuit uses two integrated function signal generators ICL8038 as the core, one of which generates sinusoidal modulation wave Ur, the other is used to generate triangular carrier Uc. After the two signals are asynchronously modulated by the comparison circuit LM311, a series of equal amplitude and unequal width rectangular wave Um, namely SPWM wave, are generated.

After the Um passes through the inverter, two channels of ± PWM waves with phase difference of 180 degrees are generated. After delay by the trigger CD4528, two channels of SPWM1 and SPWM2 waves with phase difference of 180 degrees and a certain dead time range are obtained. They are used as the control signals of two pairs of switch IGBT in the main circuit. The control circuit is also equipped with an over-current protection interface terminal STOP. When there is an over-current signal, the STOP is in a low level and outputs a low level through the and gate, which blocks two SPWM signals and turns off the IGBT, thus playing a protective role.

Figure 3: Control circuit of of the AC-DC-AC VFD.

ICL8038 is a precise waveform generator. The frequency of the waveform can be from 0.1001hz to 300Hz. Its internal structure is shown in the figure 4.

Filter circuit is often used to filter out the ripple in rectifier output voltage, which is generally composed of reactance elements. These elements include capacitor C in parallel at both ends of load resistance, inductor L in series with load, and various complex filter circuits composed of capacitor and inductor.

Therefore, after inductance filtering, not only the pulsation of load current and voltage is reduced whose waveform becomes smooth, but also the conduction angle of rectifier diode is increased. Under the constant condition of inductors, the smaller the load resistance is, the smaller the AC component in output voltage is.


It can complete the following work:

(2) Transform the signal generated by the control circuit into the appropriate drive signal needed for the control on-off.

(3) The function of withdraw saturation protection prevents the damage of over current and short circuit.

The design circuit consists of three parts: main circuit, drive circuit and control circuit. The AC-DC conversion is an uncontrollable rectifying circuit, and the DC-AC conversion is a single-phase bridge inverter circuit composed of four IGBT transistors with bipolar modulation. The output is filtered by LC low-pass filter to get high frequency sine wave (fundamental) output.

If it is a pure resistance load, there will not be fluctuation in the DC current. According to the simulation waveform, the AC fundamental voltage output by the inverter is 220 V, which is consistent with the theoretical value in the above mathematical analysis.

It is basically consistent with the theoretical value.

- AC supply voltage amplitude is Ud / 2.
- DC side need two capacitors in series.
- It requires to control the voltage balance between the two.
- It is used for small power inverter below several kW.

Thank you for your reading and more information please visit https://okmarts.com/news/study-on-the-performance-of-single-phase-ac-dc-ac-inverter-circuit.html