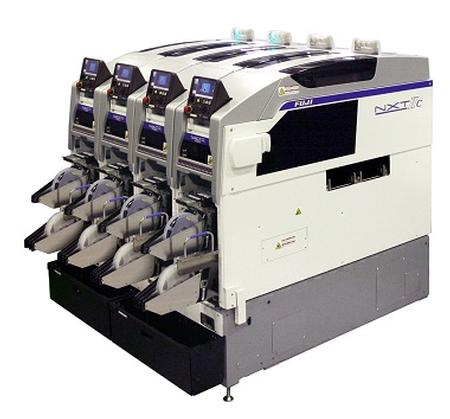 Fuji’s new NXT IIc machine is an addition to the already popular NXT series line up and is enabling customers around the world to achieve some of the best area productivity rates in the industry.
The NXT IIc is a modular scalable placing platform just like the NXT II, but manages to squeeze the same advanced mounting technology into an even more compact body. The result is an astounding performance of 59,000 cph per square meter.

The NXT IIc machine is ideal for assembling PCBs for a variety of products, especially those found in many of today’s mobile devices. The NXT IIc shares most of the features of Fuji’s world-famous NXT series, including the same high-performance placing heads, giving it exceptional productivity and versatility. Tape feeders, stick feeders, and many other units of the NXT-series can be used on the NXT IIc, and exchanging heads to optimize the configuration is just as easy for this machine as it is for other NXT machines.

The NXT IIc achieves its industry-leading area productivity through several special features. The depth of the NXT IIc is approximately 485 mm shorter than the NXT II. While this is the main boost for area productivity, there are two more features that further raise performance. The first is another improvement from previous NXT machines - the ability to place machines back-to-back with only 60 mm of space separating them. This is significantly less than other machines, and when combined with the reduced machine depth, it drastically reduces the floor space occupied by multiple lines. In addition, the NXT IIc offers V-Advance. When using this function with V12 placing heads, you remove the parts camera and move the feeder pallet to be nearer the conveyance lane. This increases the cph of each module with a V12 head from 26,000 cph to 27,500 cph.

Just like the NXT II series, the NXT IIc offers the option of double or single conveyors. With double conveyors, you can perform production of two PCBs in the same module. These PCBs can be the same or different, which allows you a great deal of flexibility in your production schedule. Double conveyors are also convenient for performing production of the top and bottom sides of PCBs at the same time. Combining the NXT IIc with Fuji’s NXTP-M25 printer, which has the same depth and ability to be set back-to-back as the NXT IIc, allows you to put together a compact, flexible, dual lane production line that achieves the highest throughput and the highest quality. Setting two NXTP-M25 machines in the line means flexible printing of the PCBs for both lanes, and the line is not staggered as with conventional printing machines because all the machines in the line have the same dimensions.

The NXT IIc is another breakthrough in SMT production technology from Fuji. By including maximum capability in the smallest machine possible, customers can squeeze more and more productivity from the same factory floor space.

Please contact your local Fuji representative for more information about NXT IIc and other innovative solutions from Fuji.