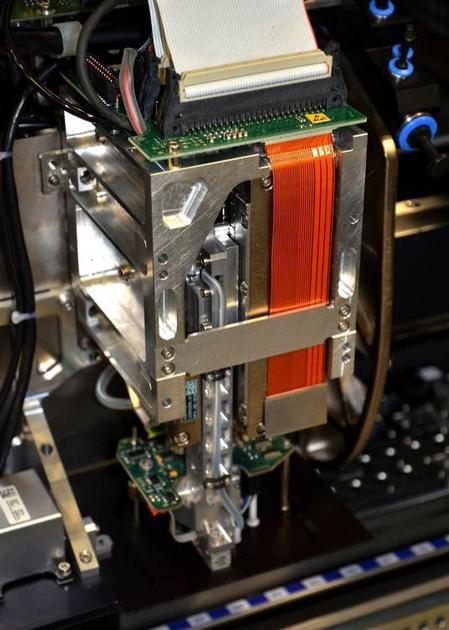 The new SIPLACE Very-High-Force Head is able to place components up to 30 millimeters high and 200 millimeters long with a force of up to 70 newtons.

With its new SIPLACE Very-High-Force Head for odd-shaped components, ASM Assembly Systems is adding another major option for its SIPLACE SX placement machines. The new Very-High-Force Head is able to place components up to 30 millimeters high and 200 millimeters long with a force of up to 70 newtons. That way, users can process on their SMT line even extremely large components with snap-in or through-the-hole fasteners such as connector modules for automotive or IT applications. And to supply these large components, an optimized version of the SIPLACE Waffle Pack Changer (WPC) is available as well. The new SIPLACE Very-High-Force Head is available as of January 2013.

With its new SIPLACE Very-High-Force Head for SIPLACE SX-series machines, ASM Assembly Systems addresses in particular the needs of electronics manufacturers who must place large components and connector modules on PCBs for automotive and automation applications without having to add a separate process. The stronger motor in the Very-High-Force Head supplies placement forces of up to 70 N, enabling it to handle even components featuring snap-in and TTH technologies. The components, which are picked up with nozzles or grippers, can be up to 30 millimeters high, up to 200 millimeters long and weigh up 100 grams.

Additional options supplement the utility of the SIPLACE Very-High-Force Head. One of these is the special OSC package for the SIPLACE WPC 5 and WPC 6 waffle-pack changers (with non-stop modules) which enable the changer to hold up to nine trays with components that are up to 30 millimeters high. And with the SIPLACE Smart Pin Support option, users can place support pins automatically in order to prevent boards from warping as a result of the new head's high placement force. The new Very-High-Force Head is available starting in January 2013.

"With its high placement force, the new head opens up a wide range of additional applications to the SIPLACE SX. Particularly in automotive applications, large connectors continue to be the technical standard, particularly on the dashboard, the navigation system, the engine controls, etc. Instead of needing separate machines and processes for these usually small lots and thus having to specialize entire lines, we now provide this capability with a new placement head that can be flexibly added to any interchangeable SX gantry," summarizes Sylvester Demmel, SIPLACE Product Manager.

At the beginning of 2011, the SIPLACE team (formerly Siemens Electronics Assembly Systems) became a business unit of ASM Pacific Technology and operates now as ASM Assembly Systems. With its SIPLACE machines and innovative manufacturing concepts, ASM Assembly Systems GmbH & Co. KG is the world’s leading manufacturer of surface mount technology (SMT) placement machines and solutions. Since its beginnings in 1985, the company has installed almost 35,000 placement machines at over 3,500 customers all over the world. Electronics manufacturers in all industries such as telecommunications, automotive, IT, consumer electronics and automation use and depend on SIPLACE's broad portfolio of solutions and services.

As a subsidiary of ASM International, which has its headquarters in Almere, Netherlands, ASM Pacific Technology (ASMPT), Singapore, has developed in only a few years into the world’s leading supplier of chip assembly, bonding and packaging systems and solutions. The ASMPT Group produces and markets machines for front-end and back-end chip assembly and semiconductor packaging. The company has plants in Hong Kong, China, Singapore and Malaysia, and since January 1, 2011 in Germany. ASMPT has been listed on the Hong Kong Stock Exchange since 1989.