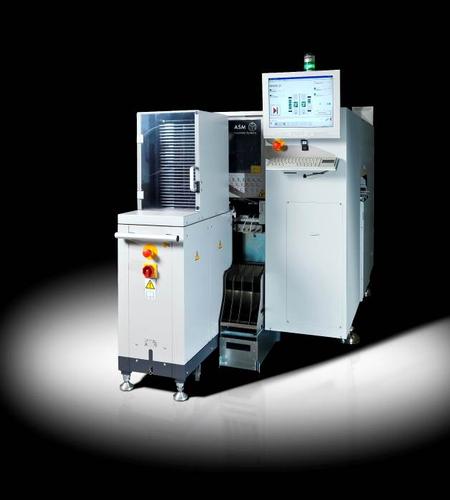 With its brand-new SIPLACE Di-Series the SIPLACE team of ASM Assembly Systems now offers proven placement quality and maximum process reliability in combination with innovative software also in the low-price segment. Technological details which are rare in this segment, such as digital vision systems, single and dual conveyors and modern, multi-language station software, are standard features on the SIPLACE Di-Series.  Available in versions with one, two and four gantries, the SIPLACE D1i, SIPLACE D2i and SIPLACE D4i guarantee quick and smart new product introductions as well as fast and accurate placement capabilities - down to 01005 components. Three flexible head types and the proven SIPLACE S-feeders complete the SIPLACE Di package, which is unbeatable in terms of its price-performance ratio.

With its well-known, highly flexible SIPLACE SX-Series and the new and extremely powerful SIPLACE X-Series machines, the SIPLACE team has clearly established itself as the leading partner for SMT placement solutions in the premium segment. With its new SIPLACE Di-Series, the company is now demonstrating that it can satisfy high requirements in terms of quality and technology in cost-sensitive production environments as well.

New features at no extra cost

The successor generation of the SIPLACE D-Series offers many new and improved features that make the everyday production flow a lot easier. New, higher-resolution component cameras accelerate the component recognition and deliver improved placement quality. The newly developed changeover tables permit faster product changeovers, and the proven SIPLACE feeders ensure a placement process that is as cost-effective as it is reliable. The new, intelligent platform is equipped to handle 01005 components by default. The single-gantry, dual-gantry and four-gantry SIPLACE D1i, SIPLACE D2i and SIPLACE D4i can accommodate three placement head models: the SIPLACE 12-nozzle Collect & Place head, the SIPLACE 6-nozzle Collect & Place head, and the flexible SIPLACE TwinHead for picking and placing large and exotic components at the end of the line.

Contrary to what customers are used to in this price segment, the SIPLACE engineers decided to make the process optimization software that plays an important role on their high-end machines available on the SIPLACE Di-Series as well. SIPLACE Virtual Product Build, SIPLACE Offline Vision Teaching and the optimization capabilities of the SIPLACE Pro software now enable even small and medium-sized manufacturers to quickly translate new products into correct placement programs and produce even the first yield with the highest quality and speed possible. And to make the line even more efficient, producers using the flexible SIPLACE dual conveyor can run two different products side-by-side. That way, prototypes or small lots can be flexibly inserted into the product schedule without having to interrupt the production of bread-and-butter items. By intelligently working together, the software and hardware options of the SIPLACE Di-Series reduce the startup costs for new products as well as the costs of running large quantities of a particular item.

The SIPLACE team (formerly Siemens Electronics Assembly Systems) is a business unit of ASM Pacific Technology and operates as ASM Assembly Systems. With its SIPLACE machines and innovative manufacturing concepts, ASM Assembly Systems GmbH & Co. KG is the world’s leading manufacturer of surface mount technology (SMT) placement machines and solutions. Since its beginnings in 1985, the company has installed almost 35,000 placement machines at over 3,500 customers all over the world. Electronics manufacturers in all industries such as telecommunications, automotive, IT, consumer electronics and automation use and depend on SIPLACE’s broad portfolio of solutions and services.

ASM Pacific Technology (ASMPT), Singapore, has developed in only a few years into the world’s leading supplier of chip assembly, bonding and packaging systems and solutions. The ASMPT Group produces and markets machines for front-end and back-end chip assembly and semiconductor packaging. The company has plants in Hong Kong, China, Singapore and Malaysia, and since January 1, 2011 in Germany. ASMPT has been listed on the Hong Kong Stock Exchange since 1989.