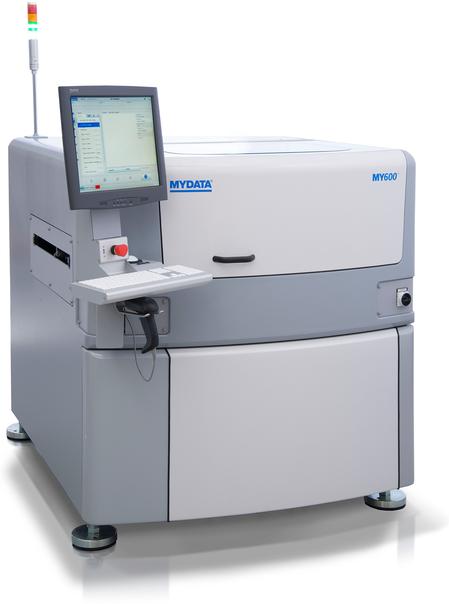 The next-generation MY600 Jet Printer now enables SMT producers to achieve optimal solder joints on complex boards at speeds of more than one million dots per hour, a 50% increase in throughput compared to earlier.

Having pioneered jet printing of solder paste for electronics manufacturing, MYDATA is now introducing a further innovation to boost speed and quality. Called the MY600 Jet Printer, the new platform allows SMT producers to achieve high-precision solder joints at speeds of more than one million dots per hour. Increasingly, the jet printing of solder paste onto PCBs is being used at all levels of the industry to cope with complex broadband and mixed technology boards, among other factors.

Shooting on the fly - with high accuracy.

“We’re delighted to introduce this high-performance platform to customers who are struggling to mount difficult components using classic dispenser technology or screen printers,” says Robert Göthner, Senior Vice President and General Manager. “The MY600 is up to ten times faster than a dispenser and, like its predecessor, shoots paste with high precision on the fly - something no one else can achieve.”

Originally intended for NPI or low-volume production, jet printers are increasing in demand for applications in high volume series manufacturing, such as tablets, cars and smart phones. A completely non-contact, software-driven technology, the MY600 overcomes many of the speed and quality limitations posed by screen printing and traditional solder paste dispensers, enabling operator-independent production of series of any size, at high speeds. The MY600 is optimal for handling flexible substrates, board cavities, package-on-package, QFNs and new components with small process windows.

“One of the key breakthroughs with the MY600 is its ability to increase both the machine’s jet printing frequency and dot size range,” says Nico Coenen, Global Sales Director. He explains that the machine’s ability to shoot on the fly with high accuracy has accelerated to 1.1 million dots per hour, compared with 700,000 dots per hour on previous generations. “It’s this combination of high speeds, superior dot consistency and accuracy that makes the technology completely unique”, adds Coenen.

Dot size - the key to speed and accuracy.

The ability to control dot volume, diameter and deposit repeatability is crucial to ensuring that each pad receives the optimal amount of paste and unmatched solder joint quality. Small dots allow for higher precision jetting and customized 3D build-up, while larger dots let the jetting head to move more quickly, improving board throughput. The new MY600 permits the operator to easily adjust solder paste volume and shape for each individual pad on the printed circuit board.

“The beauty of the MY600 is that it is entirely software-based, meaning there is far less operator intervention than with a screen printer or dispenser,” says Coenen. “This software-driven approach gives total creative control to the manufacturer and ensures a very high quality of the end product.” The MY600 can be programmed stand-alone or connected with a MYDATA pick-and-place solution in a fully automated plant. According to Coenen, upgrades to the software were necessary to achieve the latest speed and quality gains.

Double the acceleration of Formula 1

Another key factor to the jet printing performance of the MY600 is the robust platform, which includes a 2,000-kilo casted granite ballast for stability, direct drive motors and a carbon fiber beam. As a result, the MY600 is capable of providing 3g acceleration forces at one meter per second, with micrometer accuracy. This is roughly twice the average straight-line acceleration as achieved in Formula 1 racing.

To see the new MY600 Jet Printer in action, MYDATA welcomes the press, existing customers and interested parties to stop by Booth 7-129 at the SMT Hybrid Packaging show in Nuremberg, Germany, 6-8 May 2014.

Micronic Mydata AB is a Swedish high-tech company engaged in the development, manufacture and marketing of production equipment to the electronics industry. The products consist of pattern generators including mask writers and direct writers for the production of photomasks and substrates as well as advanced surface mount technology (SMT) equipment. The pattern generators are used by the world’s leading electronics companies in the manufacture of semiconductor circuits, for advanced electronic packaging and displays used in PC tablets, smart phones, TVs and computers. The SMT equipment is used for surface mounting of electronic components and stencil free jetting of solder paste. The SMT equipment is used, among others, by large and small manufacturers of electronics in aerospace, aviation and telecom. Micronic Mydata headquarters is located in Täby, north of Stockholm and the Group has subsidiaries in China, France, Germany Japan, Singapore, South Korea, Taiwan, the Netherlands, United Kingdom and the United States. For more information see our web site at: www.micronic-mydata.com

MSD Dry Cabinets
Outstanding liquid dispensing and UV curing, all within one platform, watch the video.