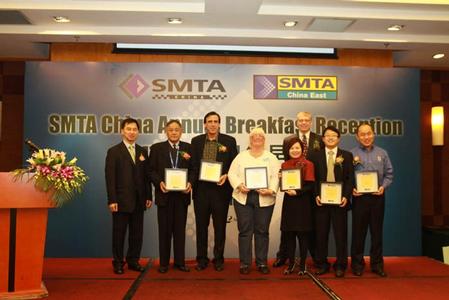 Zemin Zhang, Vice General Manager of Eastern Communications Co., Ltd., was named Officer of the Year. Zemin has provided great support for the SMTA China for years, and served SMTA China as Vice President of Membership and General Secretary as one of the key leader of our organization.

David Hu, Technical Manager of Indium Corporation, was awarded Individual Member of the Year. David has been a very active member and has provided much support over the years to both the conference and training for SMTA China and also served as a course instructor of SMTA Engineer Certification Program in China.

Megan Wendling, President of MW Associates, was named Councilor of the Year. Megan has provided much support over the years to all events including conferences for SMTA China and has solicited numerous sponsors to SMTA China.

Manpo Su, General Secretary of Guangdong Province SMT Committee, was awarded Advisor of the Year. Manpo and his committee have been a great partner to SMTA China over the years and have helped to link SMTA China and the local Chinese SMT Committees.

Indium Corporation was named Corporate Member of the Year for its sponsorship of the SMTA China. Indium has sponsored numerous conferences, golf tournaments and training for numerous years.

Reed Exhibitions (China) Ltd., Shanghai Branch was awarded Partner Sponsor of the Year. Reed Exhibitions has sponsored SMTA China Conferences and Meetings in conjunction with the NEPCON shows at Shanghai and Shenzhen for years. Reed is one of the premium sponsors of SMTA China to date.

Kyzen was named Sponsor of the Year for sponsoring many SMTA China events over the years, including the SMTA China annual reception, golf tournament, and vendor conference.

PCB007 Online Magazine was named Media Sponsor of the Year for providing tremendous support throughout the SMTA China conferences, annual reception with online interviewing and promotion of SMTA China.