The IPC APEX 2012 trade show in San Diego was an outstanding success for Assembléon. 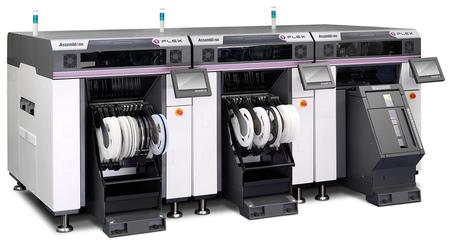 The IPC APEX 2012 trade show in San Diego was an outstanding success for Assembléon. Assembléon’s latest innovation in pick & place equipment, iFlex, had it's official North America introduction and was well received.  iFlex is unique in combining quality, flexibility, efficiency and cost control in one single machine, thus fulfilling the wishes and needs of today’s industry. The reaction from those attending the show was very enthusiastic, confirming Assembleon’s vision regarding the latest advancements in its intelligent and flexible pick & place machine.

Assembléon was also rewarded for its customer service, receiving Circuits Assembly’s Service Excellence Award. This award recognizes companies with the highest customer service ratings, as judged by their own customers.

Assembléon’s next focus is on Nepcon Shanghai (April 25 – 27, booth 1D20), where iFlex will complete its worldwide introduction.

The IPC APEX 2012 trade show in San Diego was an outstanding success for Assembléon. news release has been viewed 814 times

Discover how to revive your liquid dispensers by retrofitting latest pump technologies into your systems.
High Resolution Fast Speed Industrial Cameras.
Are you moving towards high precision applications such as 01005 dispensing? Learn how to achieve your dispensing goals without compromise.