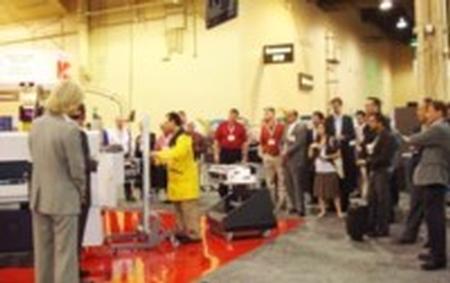 The IPC APEX EXPO™ 2010 Conference and Exhibition marked its 10 year anniversary with a sizable increase in overall attendance numbers up by 10% over last year. The SIEMENS booth surpassed all expectations with a 50% increase in visitors compared to the previous year.

SIPLACE led the show floor as the crowd pleaser, being the only supplier to perform a live technical demonstration. Even before the doors opened, The SIPLACE team had its private demonstration schedule packed full for the entire three days, with some dates and times double and even triple booked. The growing interest in the SIPLACE SX platform with its new "Capacity on Demand" concept is clearly an affirmation that this concept is the way of the future for electronics manufacturing enabling manufacturers to invest in only what they need – when they need it.

During the show a SIPLACE engineer took a second gantry straight out of its shipping crate, inserted it into the SIPLACE SX machine, and in less than 10 minutes had the machine back up and running with the increased capacity ready to go. Attendees were astonished at the simplicity of this process and to see how quickly, easily and flawlessly the upgrade was performed. Lines formed in the isles and even attendees casually walking by the booth stopped in their tracks to see what all of the attention was about. Many visitors stayed in the SIPLACE booth long after the demonstration to have further discussions and gather as much information as they could. Several of the demonstrations were video-taped by the trade media.

The new and highly innovative SIPLACE SX Platform is truly setting an industry benchmark and gaining appeal around the world. If you missed attending APEX but would like more information about the new SIPLACE SX Platform, please contact your local SIPLACE Sales Representative.