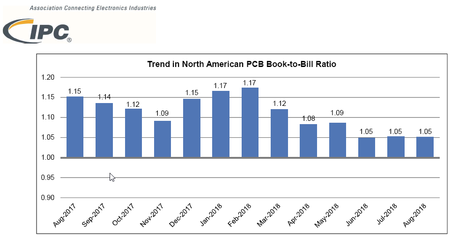 Note: The January 2018-March 2018 ratios have been revised since their original publication due to updated data from statistical program participants. 1.15 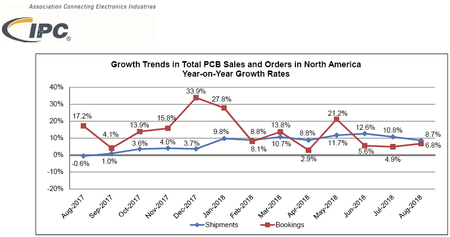 Note: The January 2018-March 2018 growth rates have been revised since their original publication due to updated data from statistical program participants.

PCB bookings in August increased 6.8 percent year-over-year. Year-to-date order growth was 11.0 percent above the same period last year. Bookings in August were up 9.4 percent from the previous month.

“North American PCB industry sales and orders continued to grow in August compared to the previous month and the same period last year,” said Sharon Starr, IPC’s director of market research. “August was the 12th consecutive month of year-over-year sales growth and the 15th month of continuous order growth. The book-to-bill ratio in August remained above parity (1.0) for the 19th consecutive month, which is a positive indicator of continued growth for the rest of this year.”

The next edition of IPC’s North American PCB Market Report, containing detailed third-quarter 2018 data from IPC’s PCB Statistical Program, will be available in November. The quarterly report presents detailed findings on rigid PCB and flexible circuit sales and orders, including separate rigid and flex book-to-bill ratios, growth trends by product types and company size tiers, demand for prototypes, sales growth to military and medical markets, and other timely data. This report is available free to current participants in IPC’s PCB Statistical Program and by subscription to others. PCB companies that are IPC members doing business in North America are invited to contact marketresearch@ipc.org for information about participating. More information about this report can be found at www.ipc.org/market-research-reports.

Dual Pot Selective Soldering Systems
Discover how to revive your liquid dispensers by retrofitting latest pump technologies into your systems.
One-stop Platform For All Your Need For SMT - QYSMT