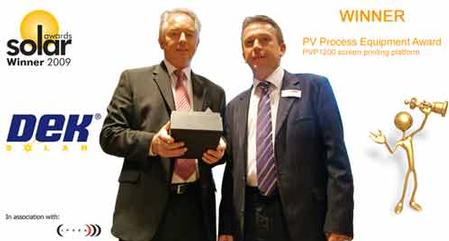 Forming one of the highlights of the show for the DEK Solar Team, the Solar Industry Awards saw the company triumph in the programme’s most fiercely competitive category. Voted for by members of the public rather than a closed panel, the PV Process Equipment category attracted the highest number of votes, which eventually cast the PVP1200 as a best-in-class solar technology. Delivering the high yields and throughput rates required by the solar processing sector, the PVP1200 has driven unprecedented high accuracy metallization of crystalline silicon solar cells. All the features of the PVP1200 that provide its clear competitive edge come from its innovative design. Exceptionally compact, the modular platform makes the most of factory floor space while dedicated handling for thin wafers maximizes yield.

Commenting on DEK Solar’s award win, Darren Brown explains: “We’re immensely proud of what we have achieved since our entry into the alternative energies market so it’s extremely gratifying to be rewarded in this way. This award is particularly special because it was voted for by members of the public; people who have seen what a difference the platform has made to the industry and, most importantly, to the bottom line of their business. We launched the PVP1200 at EU PVSEC in 2008 – so to return a year later and collect an industry award for its contribution to the quest for grid parity is fantastic. Having launched our new PV3000 metallization solution at the show this year – who knows what 2010 has in store for us and our customers!”

Held in Hamburg from September 21st – 25th, this year’s EU PVSEC exhibition delivered a fitting platform for DEK Solar to celebrate its successful transition from emerging force to established competitor in today’s solar market. Celebrating the European launch of the company’s highly anticipated PV3000 metallization solution and the contribution of its popular PVP1200 metallization platform, the DEK Solar stand attracted an extremely high number of visitors. Darren concludes: “As only our second year at the show, EU PVSEC 2009 has consolidated our position in this growing marketplace. Generating substantial interest from high-profile system integrators and turnkey providers, the PV1200 and PV3000 metallization lines look set to continue this success rate through 2010 and beyond.”

DEK is a global provider of next-generation technologies and process support to solar cell manufacturers with solutions that include modular metallization platforms, precision screens and materials applications used in back side field coating, current-collector pattern and termination deposition for photovoltaic substrate production. For more information, visit DEK Solar at http://www.deksolar.com.