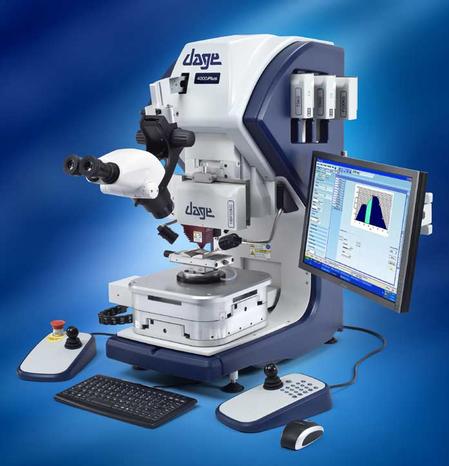 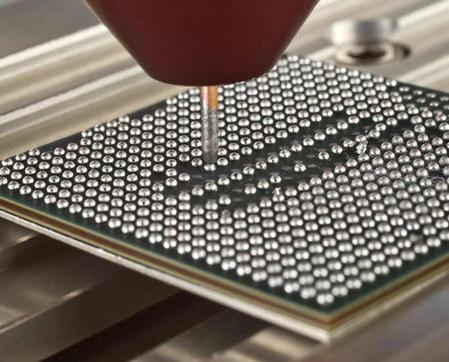 Nordson DAGE has developed a unique patented technique for attaching a test probe to solder bumps or solder paste in order to perform a hot bump pull test in full accordance with the recently published IPC-9708 test standards for the detection of pad cratering for surface mount and printed circuit board assemblies. Pad cratering has become a major issue with lead-free assemblies and the development of the IPC-9708 standard together with the availability of the 4000Plus hot bump pull test methodology enables product developers to determine the optimum materials for their applications.

The 4000Plus hot bump pull application is achieved by selecting a specialized load cartridge which can be programmed to apply a time-temperature reflow profile to individual solder bumps and/or bonds using a test probe. Reflow parameters including preheating, soak, rate of rise, time above liquidous as well as cooling rate are integrated into the 4000Plus Paragon™ software for easy on-screen profiling and control. A selection of standard probe sizes are offered as well as custom test tips that are available upon request.

Headquartered in Aylesbury, UK, Nordson DAGE is a unit of the Nordson Corporation and manufactures and supports a complete range of award winning digital X-ray inspection systems and bond test equipment for the printed circuit board assembly and semiconductor industries.

Nordson Corporation (Nasdaq: NDSN) is one of the world’s leading producers of precision dispensing equipment that applies adhesives, sealants, coatings and other materials to a broad range of consumer and industrial products during manufacturing operations. The company also manufactures equipment used in the testing and inspection of electronic components as well as technology-based systems for curing and surface treatment processes. Headquartered in Westlake, Ohio, Nordson has direct operations and sales support offices in more than 30 countries.